Salterns was the Headquarters of 210 Squadron when based at RAF Hamworthy in 1943 under the control of Coastal Command –  and shared with Transport Command / BOAC.

210 Squadron had been re-equipped with Consolidated Catalina Flying Boats replacing Sunderlands, and became known as the Catalina Squadron. The Squadron moved from Pembroke Dock in Wales, switching with RAAF 461 Squadron (the Anzac Squadron) which had been at Poole from September 1942.

Edward Walkey was on 210 Squadron at RAF Hamworthy (Poole) from 21st April to 31st December 1943 as a Member of the Groundcrew, with its responsibility for FB Maintenance and Security at the Sites.

He was billeted locally in Lilliput just a brisk walk from Salterns at ‘The Arches’, Anthonys Avenue. Squadron Members were transferred down-harbour from Salterns to Hamworthy by RAF Launches… where the FB Base there with its slipway and hardstanding had been built by the Foreshore at Lake.  Otherwise, to get to around Poole bicycles and buses had to be used, hitch a lift, or journey by foot!

Edward Walkey is a recognised artist who believes that it is important to record his Memories by Art – especially noted for his paintings of his former hometown of Pontypridd, and of his WW2 postings. His artwork is particularly striking for its unique style, and of course with a degree of artistic licence. He remarks that during the war photography was forbidden, whereas memories can be recalled later.

Edward now lives in Cheltenham, and has kindly donated this marvellous, vibrant painting to PFBC.

“My painting from memory is of Salterns Yacht Club as it was in 1943.

The Pontoon Jetty which was used to ferry ground and aircrews to the Catalinas moored near Brownsea Island, was situated to the right of the building.  The green shed on the left side of the building was the carrier pigeon shed which kept the pigeons to be carried on aircraft in an emergency if any of these had to ditch over the Atlantic…

The pontoon jetty would have been approximately situated where the middle of the 3 blocks of apartments are now.

My memory of the Architecture of the Yacht Club is rather hazy! As a young 20 year old airman I was more into feminine architecture, than that of Bricks and Mortar, but the rest of the picture is more or less true including the Fordson crew bus.

The flag pole was my companion on guard duty. I used to waltz around it holding a 303 rifle complete with 12” bayonet, doing anything to stay awake.  I was guarding my bit of the South coast of England against the German army, with a mere 5 rounds of ammunition which I kept in my pocket for safe keeping. They didn’t come, so I was able to hand my bullets back in.

When I last visited the area much had changed at Salterns & Hamworthy:

Nothing remains the same for long, only the Memory!” 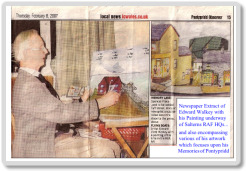 Further information and pictures of Edward Walkey and his paintings available to download here (PDF,3.5Mb) which will open in a new window

Also: a Squadron of Spitfires escorting the Flying Boat

And: PBY II & III Catalinas on their Moorings 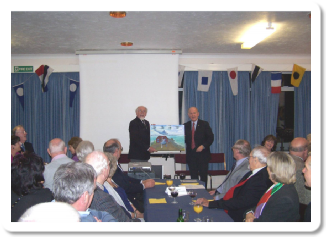 25th March 2010: the presentation of Edward’s lovely painting made on his behalf by Lilliput & Salterns local historian and Hon. Vice President of PFBC, Jeremy Waters.

Accepting the painting on behalf of PFBC is Commodore Ken Sanson on the occasion of PFBC’s Flying Fish’n’Chip Supper at Lilliput Sailing Club, celebrating the History of the Flying Boats of Bermuda (a presentation by Colin Pomeroy).