John Atkinson contacted us in September 2012 via our facebook page, including this image (right) and the message:

“My Mother with myself (2) and brother (4) flew from Poole to Australia as dated on Mother’s Equator crossing Certificate. I also have my Certificate.”

“I’m delighted that John has been in contact with the PFBC Archive, also for myself as Archivist to receive an image of the Qantas Certificate.

His memory of flying from Poole by RMA Hunter is most interesting as this was one of the last long-distance flights by a Hythe Class Flying Boat, which were being replaced by the Sandringham ‘Plymouth Class’…

Both the Hythes & Sandringhams had been RAF military Sunderlands in WW2 + adapted to carry Pax: Sandringhams were better conversions.

The prefix RMA was used to denote the carriage of postal consignments: Royal Mail Aircraft!

The routes to Australia + Hong Kong by Flying Boats were soon to be discontinued,

and service handed over on the Kangaroo & Dragon Routes to Landplanes.

As Poole had ceased its role as a BOAC Marine Terminal by 1st April 1948 and flights had been switched to the new facility of Southampton’s Berth 50, it could signify that this might have been the Return Journey, or possibly the outward series of flights which were sometimes broken to allow Pax to spend time in ports-of-call along the way ~ such as at Augusta in Sicily, or Cairo etc.

There is a lovely example of this ‘breaking of a trip’ in Francis Durbridge’s < Paul Temple and the Sullivan Mystery > involving a Poole Flying Boat (!), where one character refers to ‘taking time out in Singapore en route to Oz’.

A ‘Crossing the Line’ Qantas Certificate would have been issued on the Flying Boats (even though these belonged to BOAC) shortly after leaving Singapore, as Qantas Crews took over eastward legs (one time after Karachi): ‘QEA’ stands for Qantas Empire Airways (as once part-owned by BOAC)…

Such certificates, just like the ones issued on the Springbok route to S. Africa, are a lovely keepsake and a reminder of splendid passage by Flying Boat and Ship! 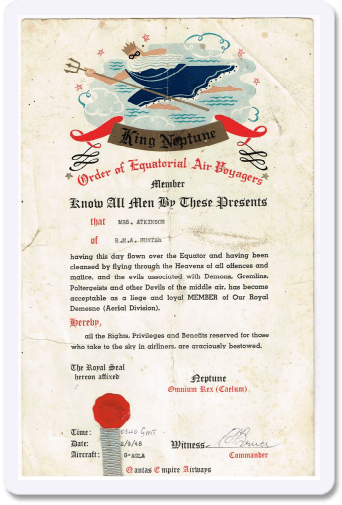 Sadly Mrs Atkinson passed away on 4th September 2012; we send our heartfelt condolences to the family she leaves behind.