Introduction and an Update 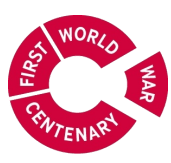 In May 2011, Poole Flying Boats Celebration signed up with the Imperial War Museum as a National Partner in the First World War Centenary Project, by completing the online pro forma. Acceptance of our Partnership was duly confirmed by Josie Gale [now the IWM’s Centenary Programme Museum Liaison Officer for English Regions].

Subsequently, the Partnership of our Charity appeared in the listing of FWW Partners ~ which detailed Poole Flying Boats Celebration was the first Poole-based organisation…

Preliminary Information which was submitted by ourselves is detailed on the next page: Accordingly, the substance of PFBC’s planned commemoration was outlined – whereby this developed the Charity’s existing First World War research base within 10 headings.

These various aspects were encompassed in the Agenda of the PFBC Trustees’ Meetings which were convened in the Summer, and again involved in an early Autumn ‘follow-up’, + our Partnership in the Centenary Project was reported in PFBC’s quarterly Newsletter. This was accompanied by an ‘open invitation’ for those interested in taking part within the Project either in its entirety, or specifically within one of the specific topics as listed to get into contact with our PFBC Archivist Aimée via PFBC’s new facility of an Office.

Through this offer… and also on the occasion of our Open Afternoons, individuals have come forward with ideas, some of which have developed & expanded areas of research. Furthermore, our in-house research has come forward with new lines to be considered…

This has provided an updated matrix which has built upon our Flow Diagram (Aut.2011) titled ‘The Participation of PFBC and Assoc. Organisations: Overview & Perspectives’, that regarded items from a national perspective (macro) thro’ to a more local level (meso).

In turn, this has led to a Review by PFBC, which has been conducted during Q1/2 2012, that has been updated into a listing of ‘Twenty Sectors’ within the Project research base, initially presented as a numbered box-diagram (noting original ideas and our new ones).

Next this was matched with consideration of how to eventually represent our findings in a meaningful and attractive format, which potentially encompasses all aspects identified as Outputs B Outcomes, that are regarded significant to PFBC & the Centenary Project. This resulted in the Translation of how these would be presented into PFBC’s Diorama.

The outline of PFBC’s Diorama prospects inclusion of the expanded realms of research: In specifically embracing the Twenty Sectors which have been interfaced into the project the point of origin of the Diorama approx. features a centralised aspect of Poole Harbour that turns around 360° from a westerly direction to due south between Sectors 18 & 19.

Whilst this focuses essentially on Longitude 2°W, ‘conformity’ is only slightly misaligned in ‘the balance’ as portrayed via the diagrammatic bearings which have been achieved.

As shown, this provides an excellent basis for describing the juxtaposition of Sectors ~ and is already giving an ease of reference for our PFBC organisers and participants. Significantly, it is also assisting even at a distance with our Network of those involved.

PFBC retains the presence of the Admiralty in one guise or another in Poole Harbour and relevant locations further afield during 1914-18 as the starting point for Research. Yet this has been interfaced with other related aspects identified within the Diorama…

Further, there is also scope to include certain related topics focused on Bournemouth, which are realised as being integral to ‘the overall picture’, and relevant to the Project:

It is prospected that these will facilitate greater opportunity for Community Involvement as part of /in accordance with a local initiative which has been geared up during 2012, that PFBC has being endeavouring to feature throughout our methodologies & process.

This reinforces our commitment to maintaining /expanding our public-access Archive, and PFBC’s liaison with & working relationships with other Groups & Organisations.

Other aspects which have been adopted within our framework of project Research are:

Although, the two dozen topics noted within the Sectors of the Diorama span 1914-18, these 2 highly significant local events act (so-to-speak) as Bookends for the Project… Firstly, as actions taken prior to hostilities with public reaction set the scene for War! Secondly, the postwar resumption of the Schneider Trophy Contest (with exclusion of Germany), as witnessed by many convalescing locally provides a poignant conclusion.

Indeed some of the topics already included within various sectors of PFBC’s Diorama have timeframes as contracts placed in the war years that extend beyond the Armistice.